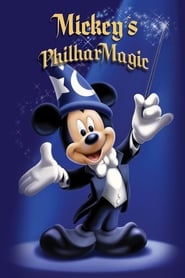 A 3-D film attraction found at the Magic Kingdom theme park in the Walt Disney World Resort, Hong Kong Disneyland, Tokyo Disneyland and Disneyland Park (Paris). The film was directed by George Scribner, who is best known for directing Disney's 1988 animated film, Oliver & Company. Mickey's PhilharMagic is a 12-minute-long show featuring 3D effects, scents, and water, as well as a number of characters from Disney movies. Despite Mickey Mouse being the title-bearing character, it is Donald Duck who stars the show. It is shown on the largest purpose-built 3D screen ever made, at 150 feet wide.