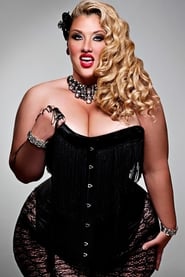 Velvet d'Amour (born 1967) is the stage name of the American model best known via the worldwide media coverage she received after her appearance as a plus-size model in Jean-Paul Gaultier's 2007 Spring/Summer prêt-à-porter collection shown in Paris in October 2006. She also made a catwalk appearance in John Galliano's prêt-à-porter showing entitled "Everybody is Beautiful" in 2006, and in the associated French Vogue article featuring photography by Nick Knight.